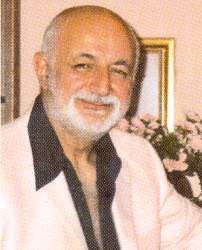 It will come as something of a surprise to many, when they first learn that ‘Sara Moon’ is the professional pseudonym of the Iranian born, German National male –  Bijan Djamalzadeh.

Here is his story …

Bijan was born on July 13, 1939 in Tehran. From early childhood it was clear that he had inherited the artistic blood of his ancestors, who included official court poets to the Shahs of Persia.

But, even though Bijan’s talent for art was recognised early, his father had other plans for his son’s future. He wanted Bijan to follow in his own footsteps and his grandfather before him, to become a doctor. Bijan reluctantly bowed to these wishes and travelled to Germany to study medicine, but it wasn’t long before his passion for art became the stronger. 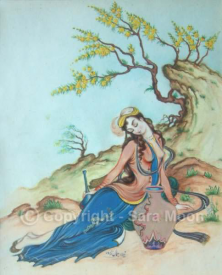 AN EDUCATION … AND A WEDDING!
In 1964 Bijan signed himself into  Saarbrücken Technical College to study textile design and gained invaluable, diverse, practical experience with various German companies before gaining his degree in 1968. He then returned to Iran with his degree in one hand and a beautiful German bride in the other! 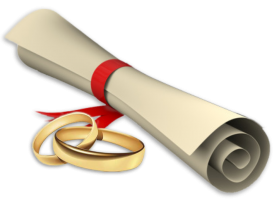 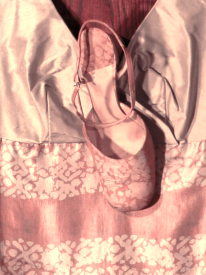 TEXTILE DESIGNER
In his homeland he found work as a designer in the Iranian textile industry and soon received a call from the Iranian Ministry of Economics where he worked as an expert in Textile Art and Craftsmanship, developing many textiles and fabric designs for Persian royalty and rulers. He also ran a private studio and gallery (atelier) where he taught art. 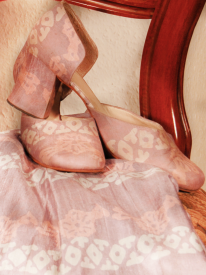 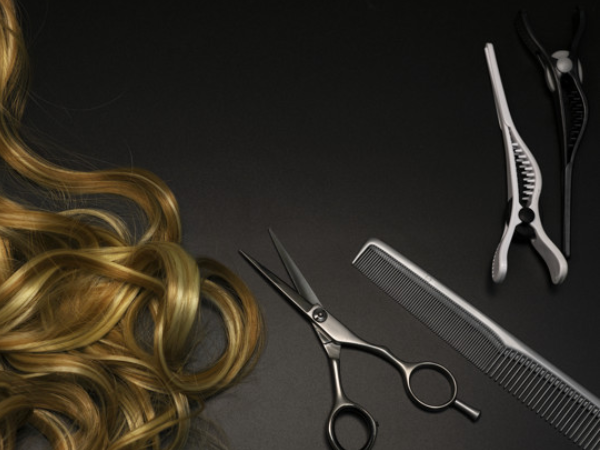 But Germany had captured his heart and the call was strong. And so in 1974 he returned once more adopting the country as his home. He sought employment as an industrial textile designer, but was unable to find a position that would fulfil his talents.

So he helped his wife to establish a hairdressing salon. This satisfied his organisational and management skills, but not the artist within. And so he returned to his art and crafts.

NEW BEGINNINGS
Bijan returned to his study of portraiture, fashions and trends, and after producing many wonderful artworks, he was approached by the owner of what was to become Red Baron Publishing in LA, USA. The brief was to create fashionable, feminine artworks that would appeal to a modern-day audience.

Red Baron Publishing would then distribute the works across the world through retail outlets from poster stores to fine art galleries. 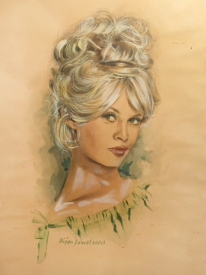 INTRODUCING ‘SARA MOON’
The professional pseudonym was decided in the belief that many potential buyers may struggle to understand the ‘Djamalzadeh’ signature, and the name ‘Sara Moon’ just seemed to suit the style of Bijan’s work so well.

The rest as they say, is history. During the three years that followed Bijan would create sixteen beautiful artworks of contemporary young women and animal portraiture and their precise detail and delicacy of brush stroke would fascinate a growing number of fans all over the world. 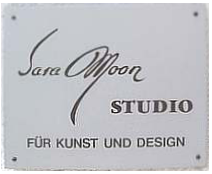 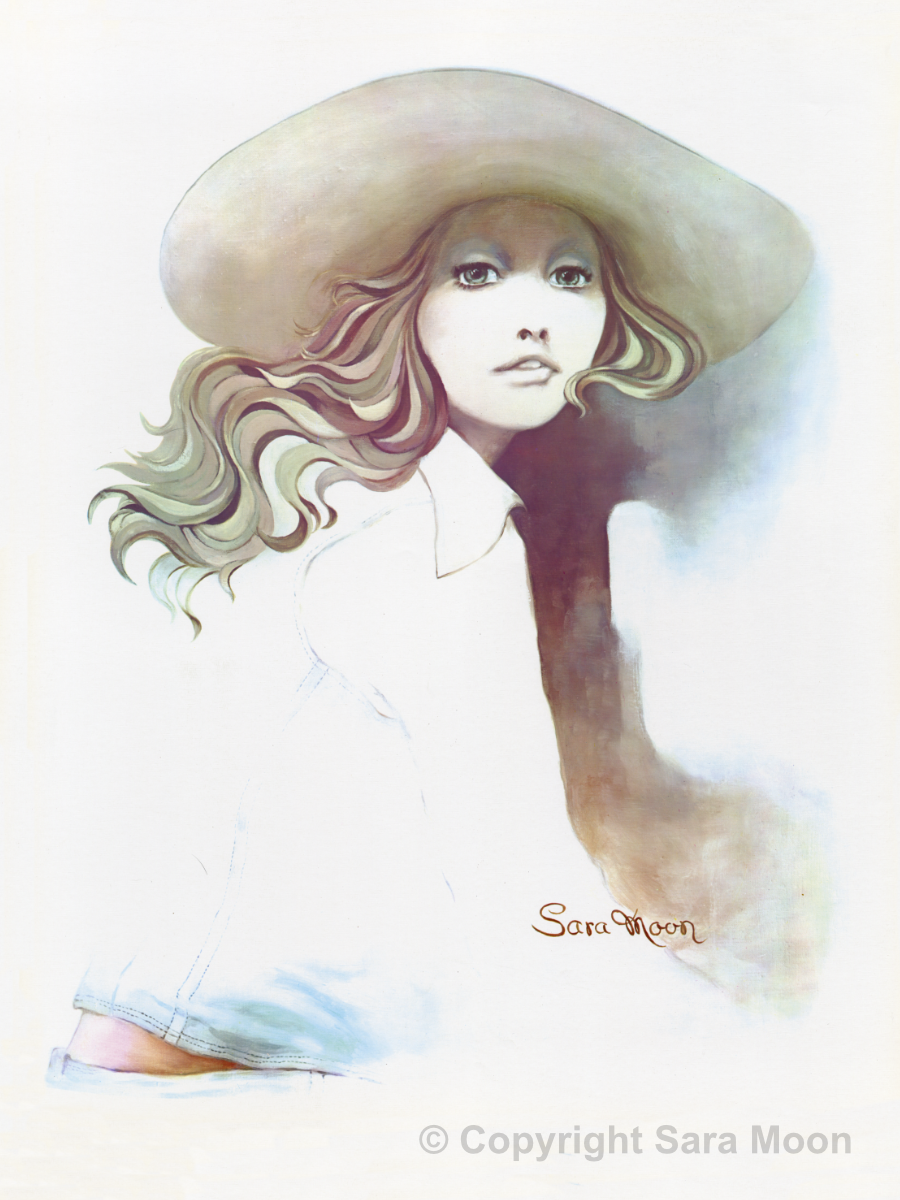 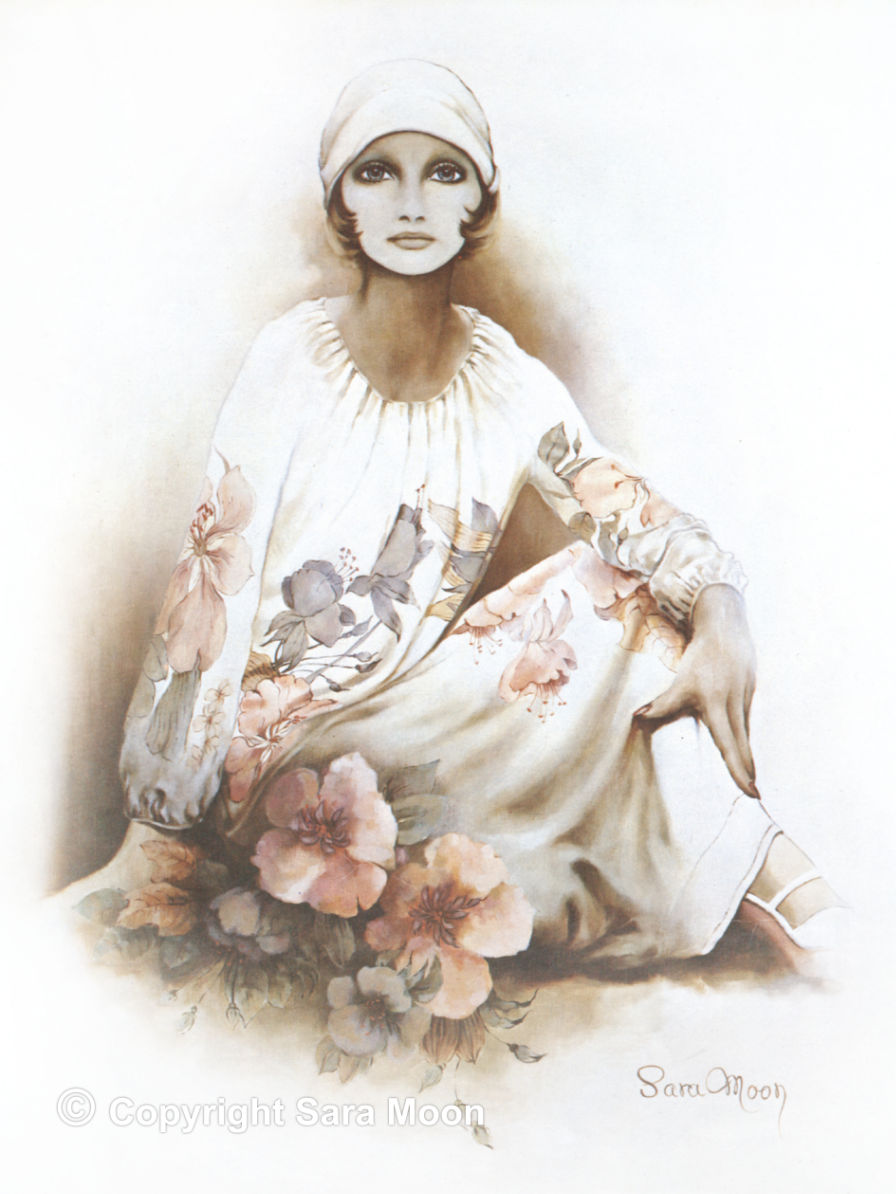 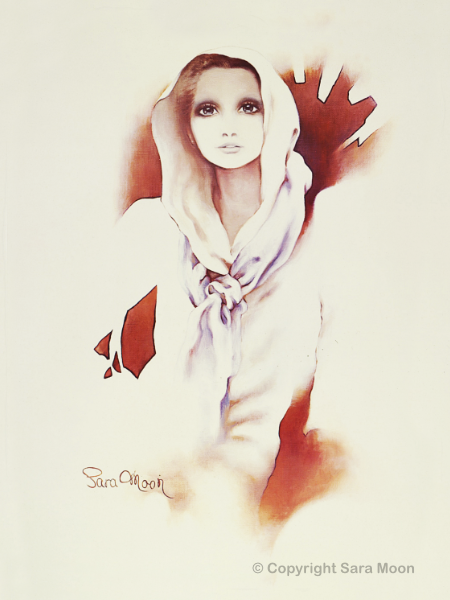 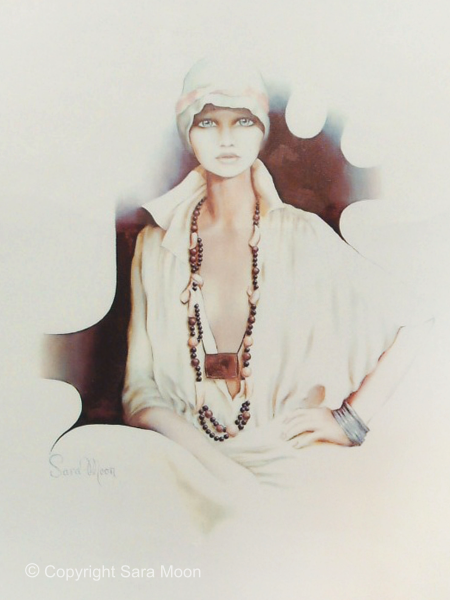 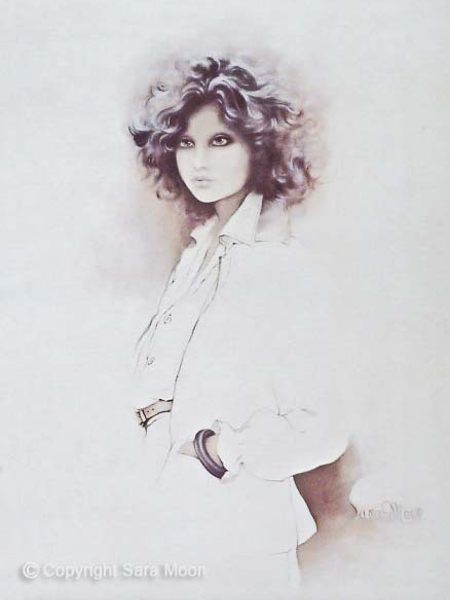 A CONFLICTS OF INTERESTS
those three later years later, Bijan would part company with Red Baron and nothing by his hand was released again for a further two years.

Unfortunately, during those two years, Red Baron Publishing claimed the name ‘Sara Moon’ as their own and continued to satisfy world-wide demand for new Sara Moon artworks by contracting the artist, Christian to paint and sign images as ‘Sara Moon’.

With Bijan now working with Verkerke in Holland, this led to works by both artists being released as ‘Sara Moon’ art during the years 1980 and 1982. 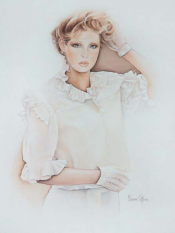 COUNTING THE LOSSES
Though Bijan owned his original artworks, they were stored in LA and feared lost when Red Baron Publishing was consumed by fire and ceased trading in the early 1980s. 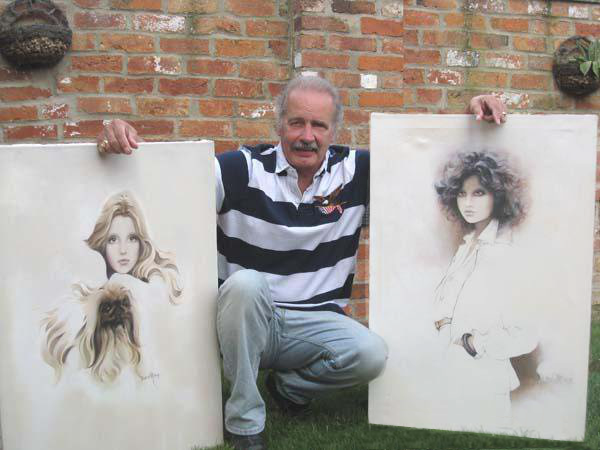 THE GOOD NEWS
In 2010, two of those sixteen missing painting surfaced, and though showing signs of much neglect, ‘Catherine’ and ‘Jennifer’ are now in safe hands once more. This of course leaves fourteen that could still be out there somewhere. You can see the missing painting along with ‘Jennifer’ and ‘Catherine’ in the first section of the gallery depicting Sara Moon Art by Date, here.

MOVING ON TO GREATNESS.
With the battle for the right to the Sara Moon name won, the decade that followed saw Bijan create over fifty Sara Moon artworks for publisher, Verkerke where for many years he was amongst their most successful artists. Not surprising, when you consider iconic works that included the like of ‘Claudia‘, ‘Hippy Girl‘, ‘Rocker Girl‘ and ‘Black Fury‘, to metion but a few. 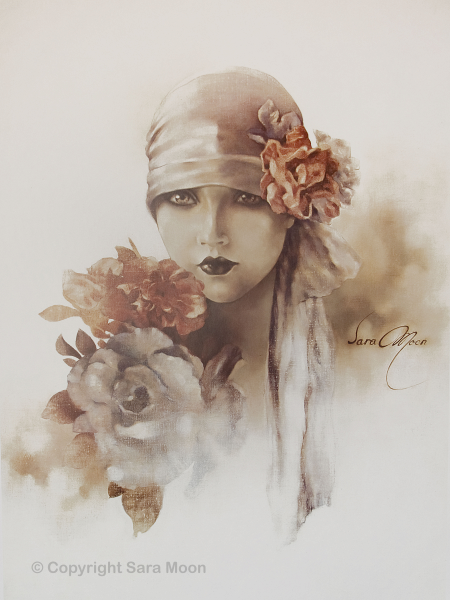 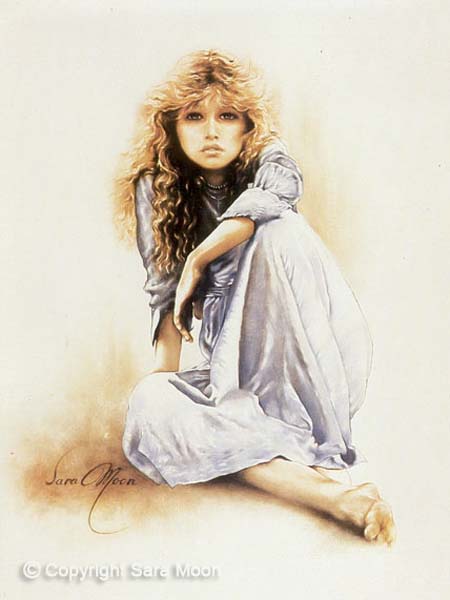 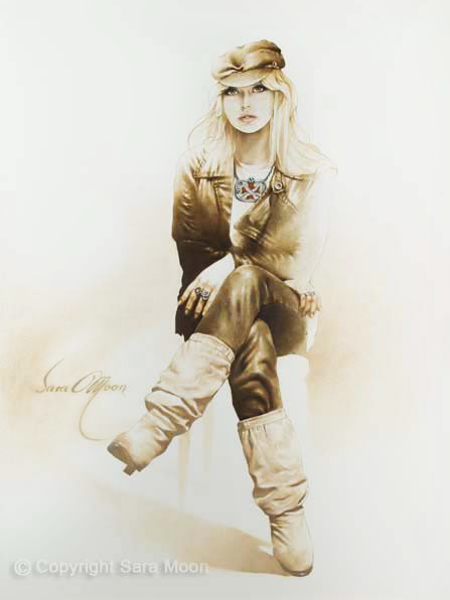 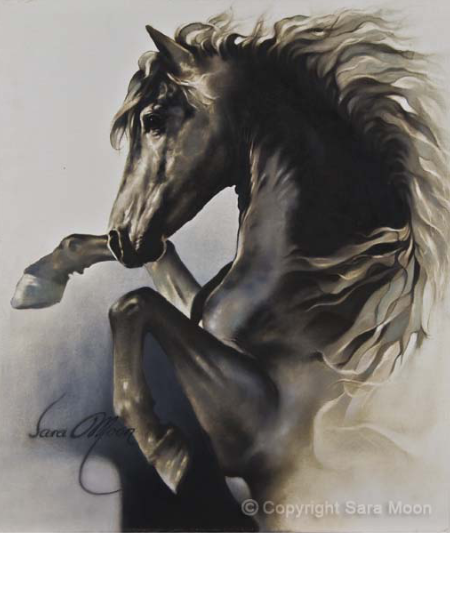 ALL GOOD THINGS …
They say, ‘All good things must come to an end’ and after a decade of bowing to the pressures demanded by the commercial world of art, Bijan decided to hang up his studio apron and retire from public life.

He could never claim to have had it all his own way during those ten years, and though he never tired of creating his beautiful ladies and portraits of the animal kind, he was also never allowed the freedom to exercise his skills beyond ‘the expected’, and retirement to draw, paint and teach simply for the love of it had great appeal.

A WORLD OF FANS IN DISMAY
For over 15 years Bijan was totally oblivious to the ‘Where are you, Sara?’ calls that echoed around the world from the multitude of devoted fans he had unwittingly left behind. With Red Baron Publishing gone, Verkerke/Scandecor remaining tight-lipped and Bijan blissfully unaware of how much he was missed, the world was left to wonder – and speculate – just where ‘Sara’ had gone!

RUMOURS AND CONJECTURE
It took a year or so for the world to notice there had been no new ‘Sara’s ‘ of late, but as those months and years drifted on so too did the desire to know just what had happened to their beloved Sara Moon.

A Yahoo ‘Sara Moon Group’ was set up and postings flooded in. “Was there ever an actual ‘Sara Moon’ at all?  – After all, the signatures varied, maybe it had all been some far-eastern Sara Moon art conveyor belt like those cheap, ‘original’ landscape oil paintings. Someone heard all ‘her’ art had been lost in a fire and, heartbroken, ‘she’ had become a recluse – and if so, where was she now? On and on the rumours went.

Rumours that the artists was actually a Iranian male hiding away in a small German town, turned out to be quite accurate – though Bijan wasn’t actually hiding – he just didn’t have a publishing contract and didn’t want one, nor did he have, or want, a computer. As such his world became the quiet place he had ached for where his art was now his great pleasure.

STEPPING BACK INTO THE LIGHT
Then, during 2005, Bijan heard through a relative, about the Sara Moon website that I had built to showcase his art and about the activities of the many-hundred-strong Sara Moon Yahoo Group. With that Bijan took a tiny step forward, back into the world of his fans again, by asking the relative to email me to say, ‘Hello and Thank You’ for helping keep ‘Sara Moon’ alive.

I had waited nearly five years for that connection and when it came, I was very pleased to be sitting down.  Imagine then my joy when in February 2006, I was invited to Bijan’s home and studio to meet with him and to view many of his creations old and new. For the story of a day I shall never forget, with many personal and studio photos as you go, please click here.

Since then, Bijan has been persuaded to take further steps toward a future that has included the chance for us to see new and previously unpublished works and even the opportunity for you to purchase his long-held archive prints – now all personally signed. He has offered many originals for sale too, all kept in beautiful condition, away from all light for over two decades. You can find what’s on offer in signed archive prints here. and the original artworks for sale here. A book of works is also available in two different sizes, here.

AND NOW …
Bijan and I work together in ways that helps preserve his privacy in retirement and yet allows us all on-going peeks into the life and work of this quite remarkable artist.

Some favourite photos of us all together at Bijan’s home. 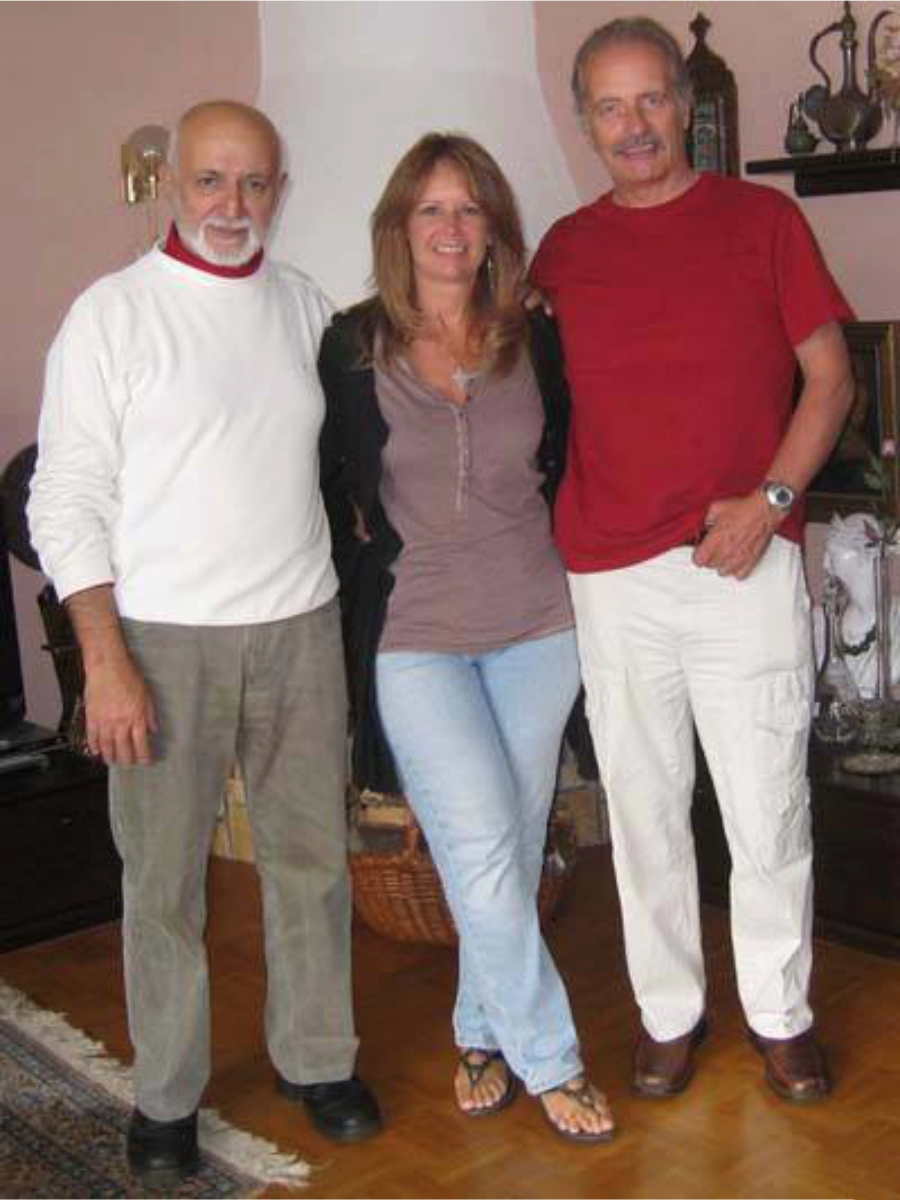 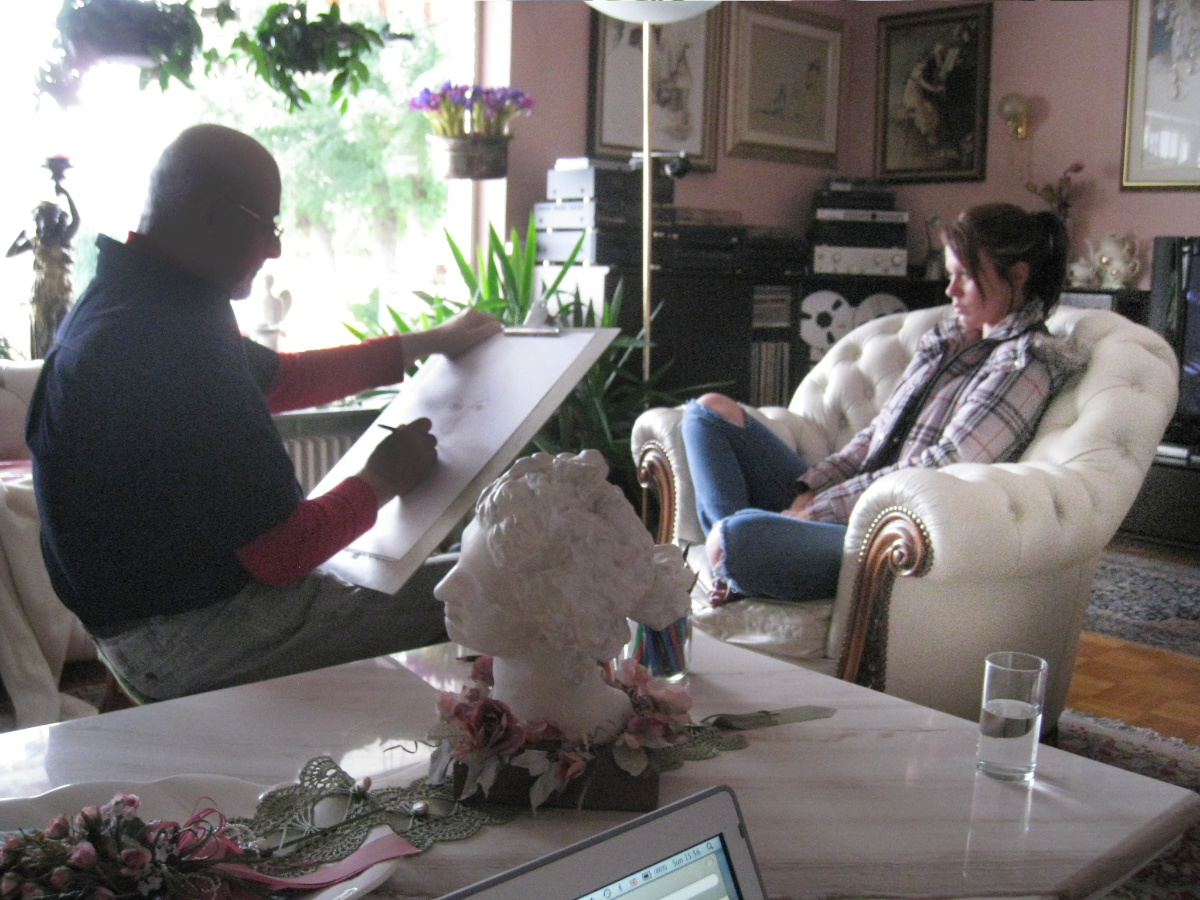 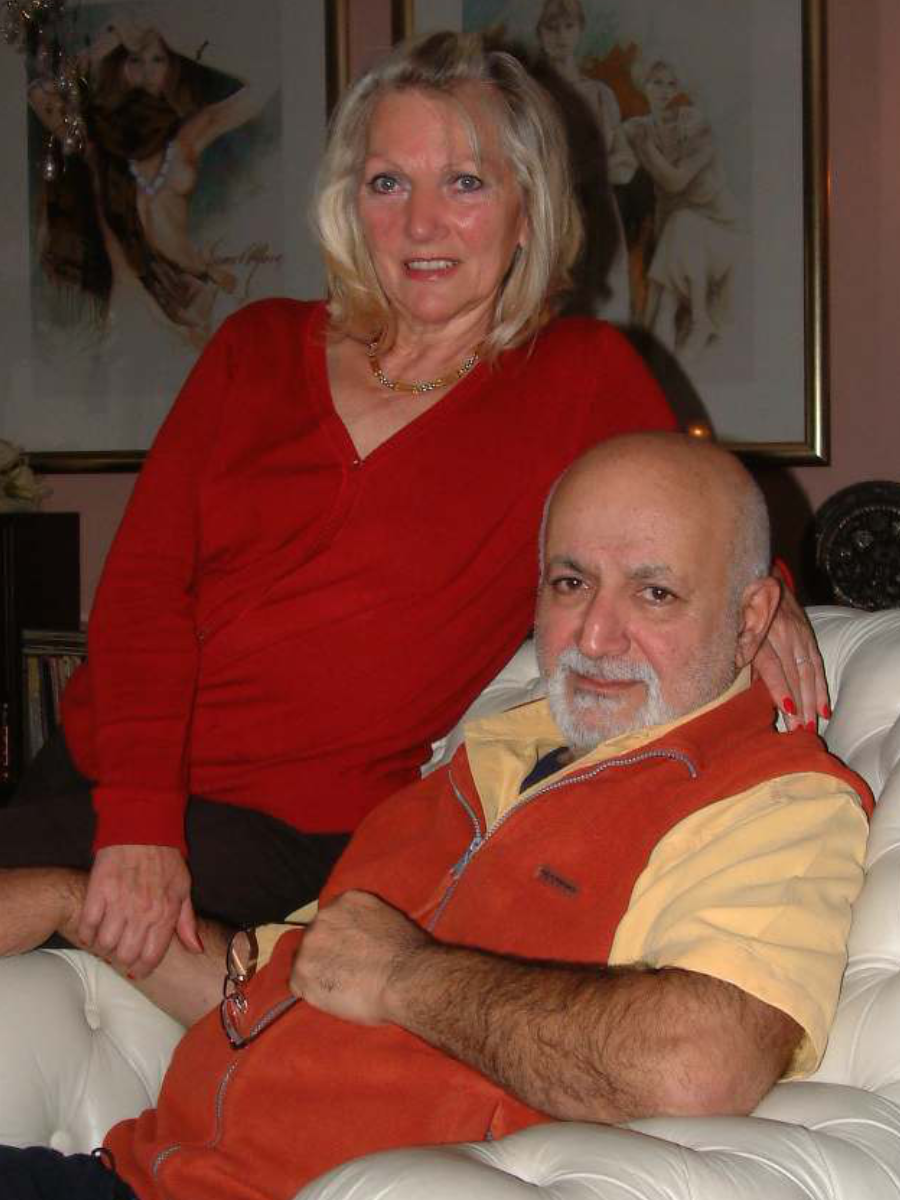 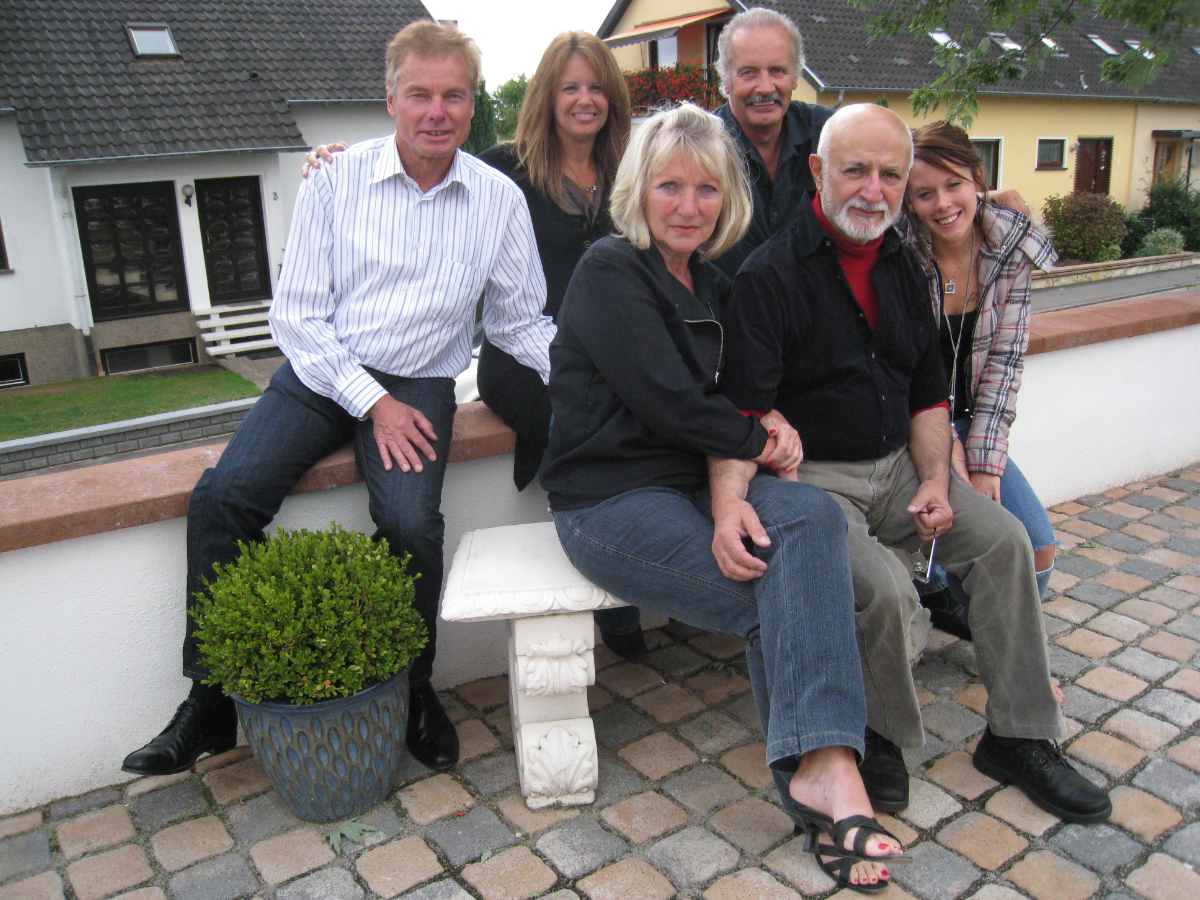 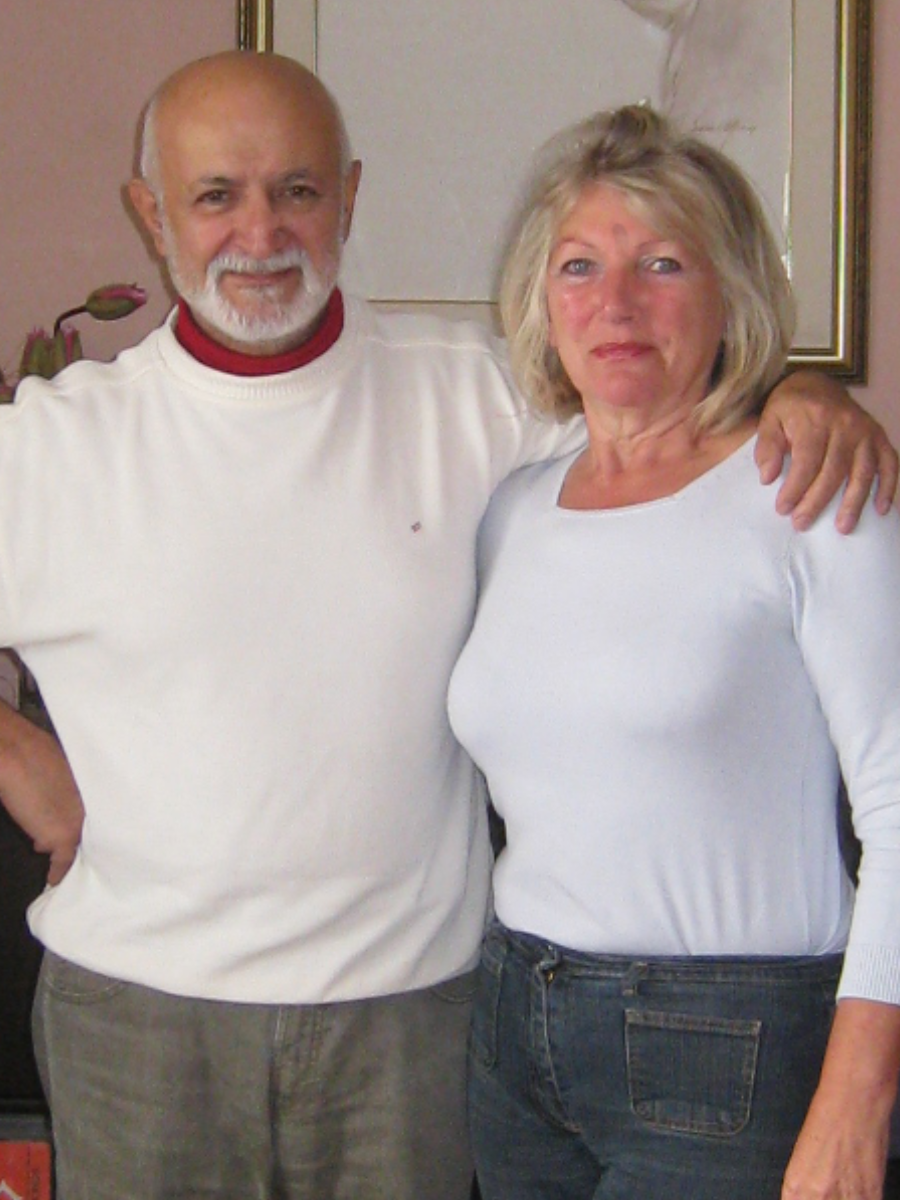 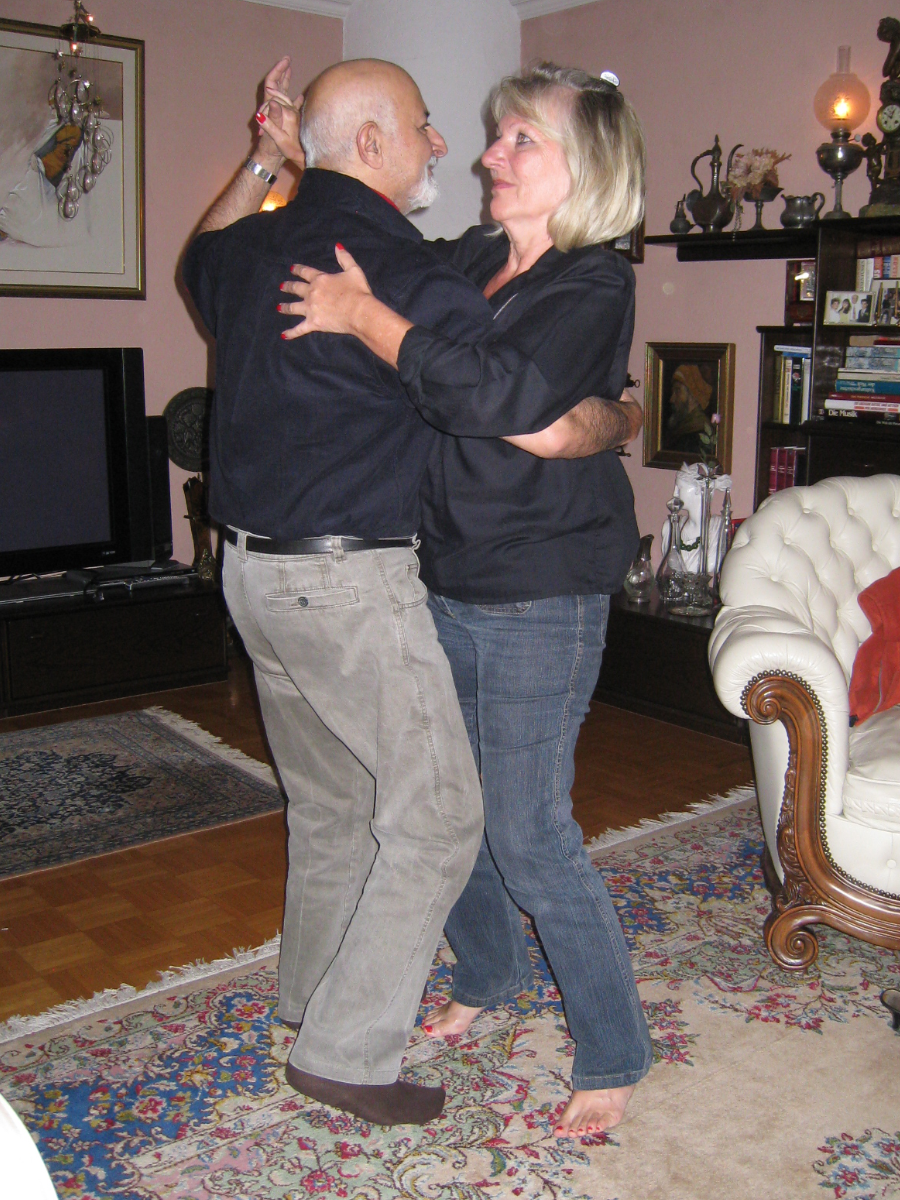 Bijan & Christel, dancing the night away! 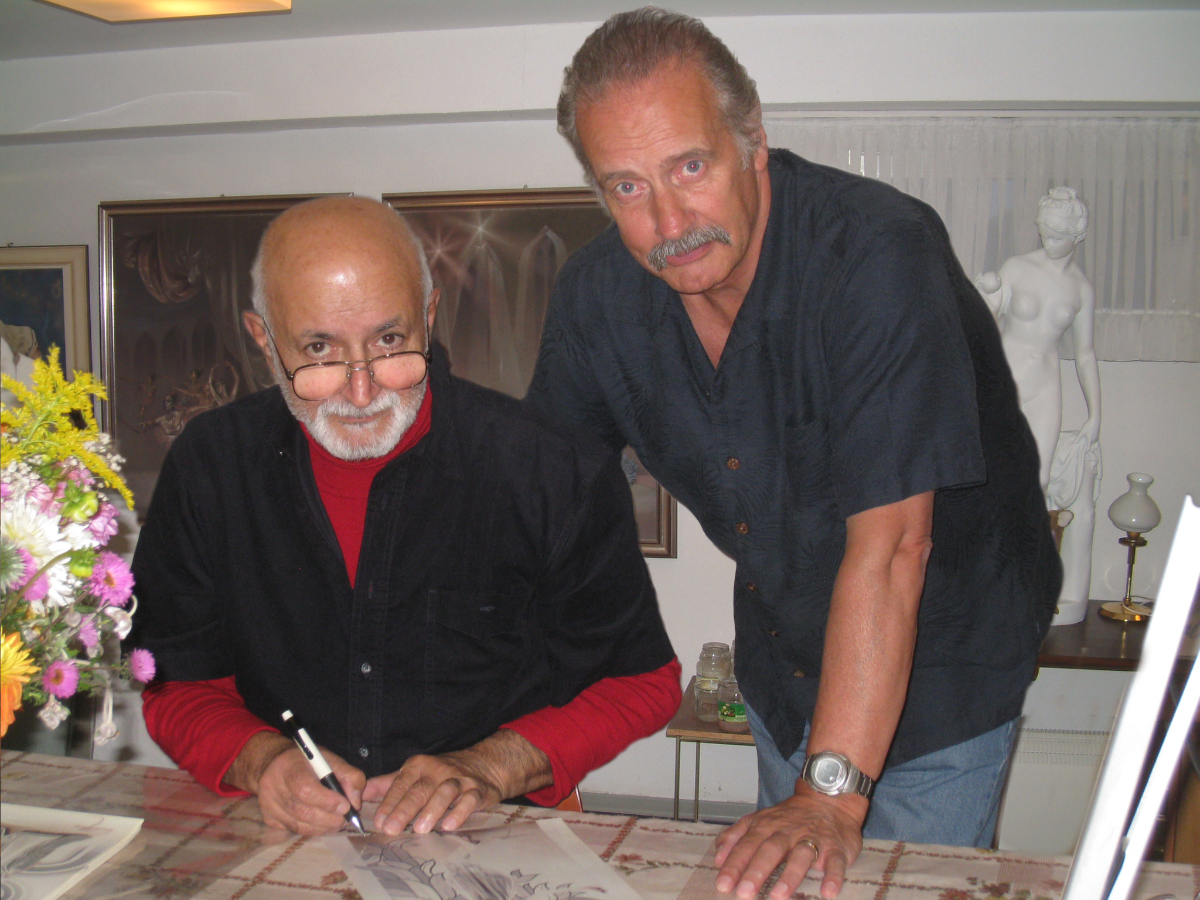